Like the Germans, the British love eggs and food made from them. However, if you want to buy eggs in Great Britain right now, you are likely to come across empty shelves in the supermarket because they are in short supply. In addition to avian influenza, the main reasons for this are the increasing costs for farmers. The inflation It contributes to this because it erodes profit margins. The UK’s egg crisis is emblematic of a food shortage that came unexpectedly and is not going away any time soon.

As Bloomberg recently reported, in the UK, the popular egg fell victim to turmoil that led to empty shelves in many stores. Supermarkets are now rationing sales, bakers are considering alternatives and farmers are calling for government action. Aside from the immediate effects, the egg crisis also shows how easily structures in food markets can be disrupted.

The crisis shows how quickly unforeseen events can affect consumers. The assumption that everything has always existed should not be taken for granted. For now, eggs are available for breakfast. Next week or next month, it could really be another staple.

“What is currently happening in the egg market could easily be replicated in the fruit, grain or meat market,” says Tim Lang, Emeritus Professor of Food Policy at City University of London. “It doesn’t take much to marginalize a particular sector. And I think that’s what we’re seeing here.”

Fear of the egg crisis is not a purely British phenomenon. The Russian invasion of Ukraine caused the price of grain, fertilizer, and energy, which are important agricultural inputs, to skyrocket.

Rising chicken feed costs have squeezed farmers’ profit margins. Moreover, the bird flu wreaked havoc across much of the United States and Europe, resulting in mass killings of poultry. In the US, egg prices outpaced food inflation last month, while in Hungary the government is capping prices.

But in the UK, supermarket shelves are empty and consumers are wary of stocking up before Christmas. In the UK, food costs have been relatively low for years thanks to stiff competition between supermarkets. But the system is collapsing under the pressure of inflation, exposing a fragile relationship between retailers and their suppliers. For Lange, author of Feeding Britain, this is a great example of how stress can play out in delivery systems just in time.

“I think the big picture applies to almost everything,” he said. “We see the economy in time reaching its limits.”

According to Bloomberg, farmers feel that costs have skyrocketed without getting value for their produce. A survey of members of the British Association of Free-range Egg Producers found that a third of farmers either reduce the number of chickens, stop producing eggs, or abandon them altogether.

“Inflation is unfortunately here,” said Phil Crawley, an egg producer from Leicestershire and vice-chairman of the National Farmers’ Union’s Poultry Committee. “And it has not been passed on to all agencies. What we need as farmers is transparency and fairness throughout the supply chain.”

On Monday, the National Farmers Federation called for an urgent government investigation over the declaration of “extraordinary market conditions” and the granting of subsidies to farmers. According to the association’s president, Minette Batters, soaring energy prices, supply chain disruptions and the worst outbreak of bird flu in history cannot alone explain the crisis of eggs and empty shelves. 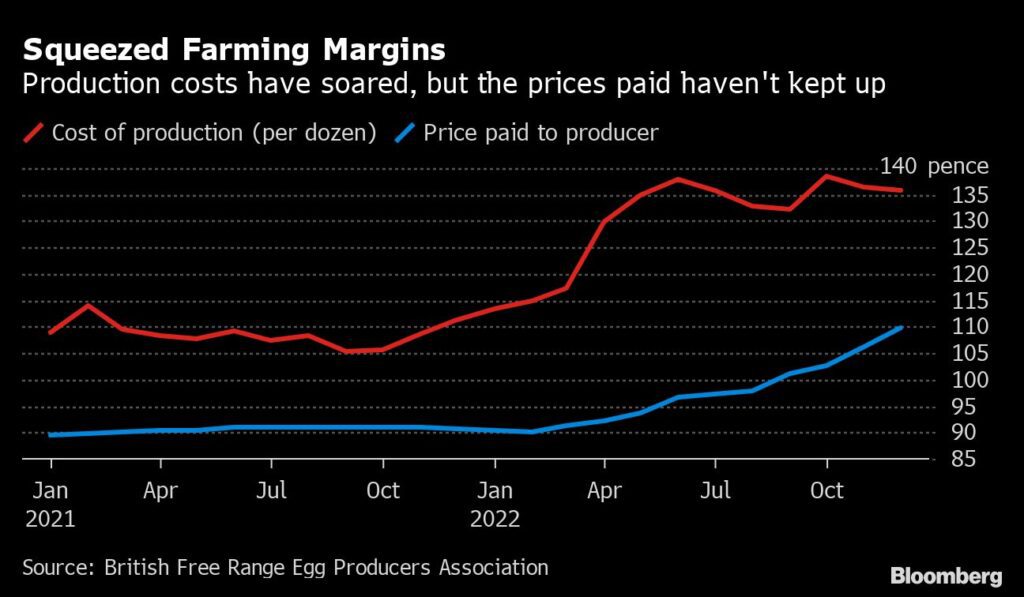 Andrew Opie, director of food and sustainability at the British Retail Consortium, said supermarkets “know they have a sustainable price to pay egg farmers, but are constrained by the amount of additional costs they can afford to consumers during a cost-of-living crisis”. .

Inflationary pressures in the UK may also play a role, forcing cash-strapped consumers to shift from meat to cheaper protein sources such as eggs. In addition, the demand for eggs is significantly higher in the winter, especially around the Christmas period.

And for agriculture, there’s often no quick fix to supply bottlenecks. Farmers cannot start another assembly line or change the production schedule.

“We don’t make tools for beer cans,” Crowley said. “We have live animals that produce a natural product. A hen puts in what a hen puts in.”