Bitcoin USD on a daily basis

Bitcoin started the reporting week at the $38,000 level, after this area came into focus again at the end of the previous week. A trading close of $38,472 on Sunday was followed by an almost unchanged daily close of $38,497 on Monday. On Tuesday, the market gave up ground again, resulting in a close near the previous day’s lows in the $37,700 region. On Wednesday, the buying that started took the price back to $39,674 and just below the 40,000 area. As has often been noted in recent weeks, the massive sell-off immediately put the Bitcoin price under pressure again on Thursday. As a result, the price at the end of the day was $36,543, which is again close to the lows reached at the end of January. Bad signals immediately accompanied the rest of the trading sessions for the reporting week, all marked by lower daily highs and lows. Bitcoin finally ended the week with a price move just above the 34,000 area and thus close to the lows reached at the end of January.

The first signals of a trend reversal have been invalidated 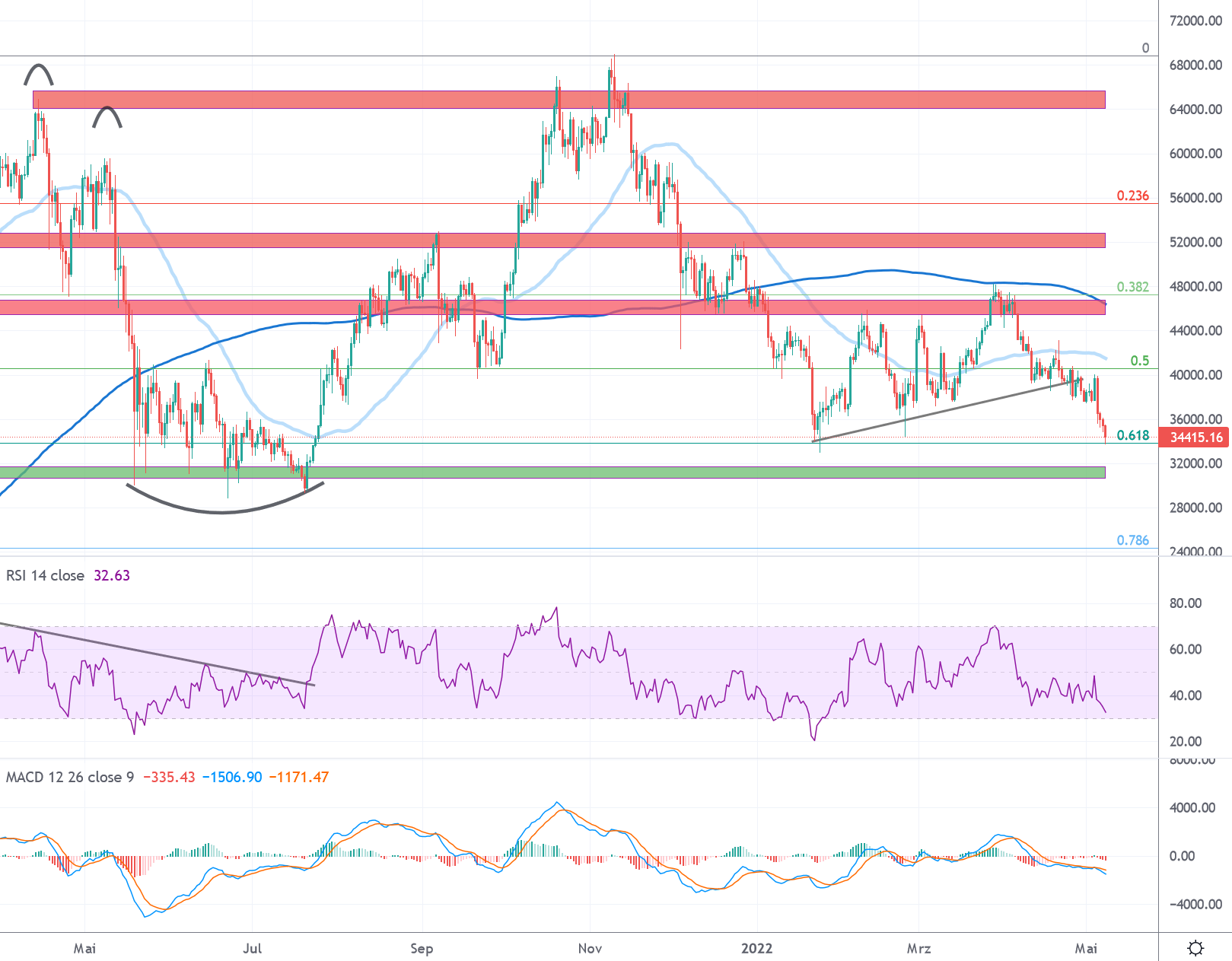 After the price collapse in mid-March 2020, a real counter-movement began. This led to the resistance areas above $10,000. After an initial rejection and a nearly two-month consolidation phase, a breakout through a key resistance area followed on July 27, 2020, which has persisted since August 2019 and caused Bitcoin to fail several times.

The area acting as resistance around the USD 10,000 level has been interesting in several respects. On the other hand, the 0.618 Fibonacci point of the entire downward movement, which was announced at the end of June 2019 just below $14,000, was in this price range. On the other hand, the area around $10,000 has been testimony to the continued downtrend from the higher-lows since December 2017 (see aggregate supply on a weekly basis). Bitcoin managed to consolidate itself above the newly created support in the $10,000 region since the end of July 2020, and with a break of the resistance area around $12,200 at the end of October 2020, provided the first confirmation of a trend reversal in the ongoing bear market since 2018. In In the following weeks, the positive trend was highlighted and led Bitcoin through the 14,000 resistance at the beginning of November 2020 and at the beginning of December for the first time near the all-time highs of $20,000, which has remained unchanged 158 weeks since the 2017 bull market.

With the old all-time high of $20,000 breached, a reversal in the trend was certainly harbinger. Accordingly, there was a strong focus on the upside, which sent bitcoin price to an all-time high of less than $65,000 in a period of just over 4 months. However, the rapid upward movement came to a sudden halt in mid-May 2020 and drove Bitcoin back to the $30,000 region. After the three-month consolidation phase, the upward movement stalled after “Bottom rounded“It continued admirably in the 0.61 Fibonacci region, which finally ended after a ‘retest’ of the 40,000 region with a new all-time high of $69,000 in October 2020. Since then, a strong correction phase has dominated again, which has brought bitcoin price back to The $34,000 area and thus to the trend-setting price areas.The formation of a 70-day bottom, marked by higher lows, finally led Bitcoin to overcome the stubborn resistance of 45,000. This structure has now been broken and Bitcoin has returned to the bottom area formed at the end of January.

Just 73 days after the all-time high of $69,000, the subsequent breakout of the 40,000 support area suggested a change of course. The 401-day uptrend appears to be running out. Thus the further direction of the move could turn into longer sideways moves and a bottom formation in the 34000 range remains to be proven.

Since the bottom of the last correction was reached, a bottom formation was recorded, which manifested itself in a series of higher daily lows. Right after breaking through the 45,000 resistance, a sharp consolidation started, which brought bitcoin price back below the 40,000 area. As prices fell in the reporting week, the 3-month-established price structure, which had recently suggested a return of bullish momentum, was broken.

It drops below 38,000 regions It drives as expected Back to the lows seen in late January. It remains to be seen if the last important stronghold of the overall bullish trend will hold above 30,000. The price action in the reporting week suggests a long and difficult period at the moment. The $32,000 area should shed some light on the overall situation as there are historically important price points here. 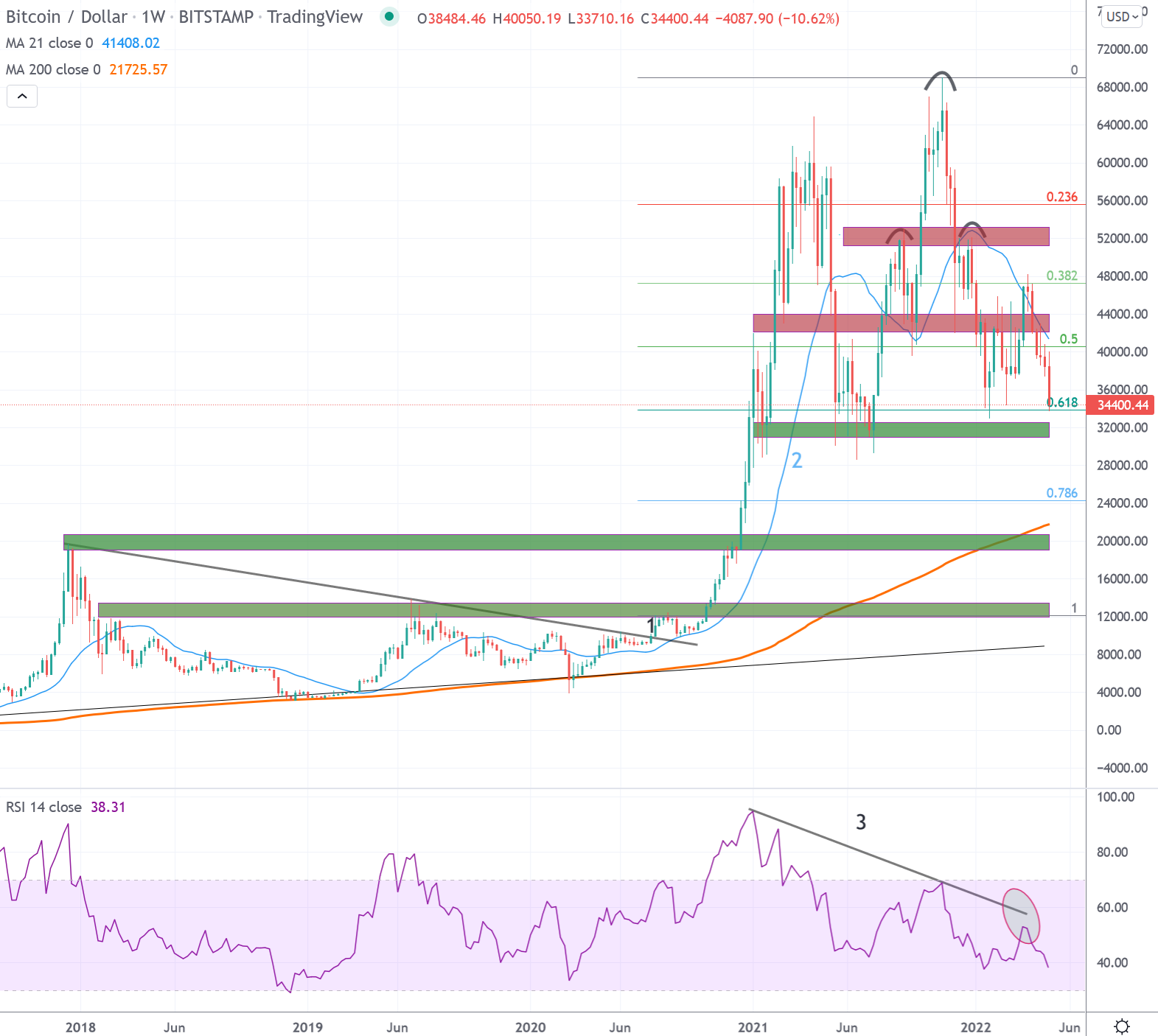 In 2020, Bitcoin managed to post a higher high above $10,000 in a weekly interval for the first time, breaking the prevailing downtrend since December 2017. This interrupted the 135-week streak of lower highs (1).

Since this first breakout of the downtrend, signals of a valid trend reversal have intensified. With a breakout of significant resistance areas and continued development above the 21-week average (2), the probability of an all-time high established in 2017/18 has increased significantly. This scenario played out in mid-December 2020. This was followed by a strong price discovery above this historical area, which produced a new all-time high of $65,000 in mid-April. The consolidation that began since ended with a real price slippage that brought bitcoin back to the $30,000 mark in just two weeks, thus bringing it below the 21-week average(2) that marked reliable bull or bear market phases in the past.

However, a subsequent breakout from the 10-week consolidation zone of $30,000-$40,000 and a subsequent successful “retest” of the upper band of this channel recently brought bitcoin into an impressive counter-move above the all-time high set in April. After establishing a new all-time high in the $69,000 region in November 2021, a sharp correction phase has started again, similar to the pattern observed in May. This initially led to a breach of the 50,000 support area, which immediately caused a rebound in this new resistance area. The past few weeks have once again been marked by a correction phase that has prevailed for two months now and has recently allowed Bitcoin to breach the important support area of ​​40,000.

The massive bullish phase that has been going on since July 2021, which broke out from the healthy 0.618 Fibonacci area calculated since the start of the bull market and the April high, was in check. A drop below the 40,000 range meant that rapid sustained price detection beyond the 69,000 all-time high was out of reach for the time being. The market sets a slower pace with the risk of falling into a bear market.

The series of higher weekly lows and highs since October 2020 is in tact, but a drop below the 40,000 area has caused major cracks in the fundamental. The Weekly RSI (3), which showed negative price development divergence, although at an all-time high, indicated that momentum was weak. The correction in recent months has impressively confirmed the picture of this indicator.

Since reaching a new all-time high of $69,000 at the beginning of November, the bitcoin price has corrected 50% in the meantime. Historically, this price behavior has often been observed even in bull market phases. With the new breach through the 45,000 resistance, the chances of ending the last correction phase increase. The series of lower highs since the all-time high was broken, which is an important step for further price gains. The weekly RSI should bring increasing chances of a continuation of the bullish movement if its downtrend, which has lasted for more than a year, is broken.

Bitcoin’s recent bull run failed to continue from higher weekly lows. The current big drop below the 40,000 area is now testing the relevant 32,000 support area. This is where the final decisive battle between the bulls and the bears should take place, because this area is where the 0.618 Fibonacci area is located, which was calculated since The beginning of a bull market and an all-time high. A sustained decline below this range could undermine the price area already in contention in July 2021, which will come close to confirming the bear market.

Risk notice
Investments and investments, especially in cryptocurrencies, are always associated with risk. Total loss of invested capital cannot be ruled out. Cryptocurrencies are highly volatile and thus can be subject to extreme price fluctuations in a short period of time.