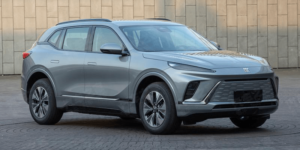 General Motors’ Buick brand is preparing to launch its first electric model in China. The first images and information about the model come from an application for approval at the Chinese Ministry of Industry and Information Technology. The resource of batteries, for example, is surprising.

The e-SUV based on GM’s Ultium platform will be called the Buick Electra E5 and will have a power output of 180 kW. The NMC battery, whose capacity is not yet known, will come from CATL. In North American models based on Ultium, GM relies on its own cells from the joint venture with LG Energy Solution. LGES also has manufacturing facilities in China, so the move to CATL was a bit of a surprise.

According to documents from the Ministry of International Trade, the SUV measures 4.89 meters in length, 1.91 meters in width and 1.68 meters in height. The model will be offered in China with 18-inch wheels, with 20-inch wheels available as an option. The curb weight of the car is 2.57 tons. This means that the Electra E5 rivals the Nio ES6, for example. However, the portal “CN EV Post” reports that the Electra E5 will probably not have a lidar system for an additional cost, which is now mostly available in similar models from Chinese manufacturers.

When it comes to design, the Buick Electra E5 is reminiscent of Study Electra X, albeit (as usual) rather lightly. These include, for example, very narrow headlights. Nevertheless, Buick can quickly be recognized as a purely electric car: the front is almost completely closed, and the radiator grille is only slightly indicated by a pattern.

As a rule, there are no more significant changes between the model submitted to the Ministry of Communications and Information Technology and the production car. The market is usually launched within a few months after registration with the ministry. Prices are not yet known.

Buick, meanwhile, had the model designations Electra E1 to Electra E9 protected in the USA. So it’s likely that the Electra E5 will be launched in the US (or at least a model with the same name), along with a number of other electric models. It was Buick in June 2022 It announced its transition to a pure electric vehicle manufacturer by the end of this decade.
Carscoops.comAnd the cnevpost.comAnd the gmauthority.com (the three Electra E5), gmauthority.com (brand applications)