Of every four Colombians that Kantar consulted about the country’s economic prospects, three responded that they were unfavorable. The rising cost of living and, more recently, the rising dollar have taken their toll, and as if that weren’t enough, the economic recession in the US will put more pressure.

One of the harshest analysts is the idea that the country has already entered a recession. The most sober believe that this will happen next year; Bank of America, for example, notes this scenario for the end of 2022.

In any case, Colombia should be attentive because from an investor who doubts whether to direct more dollars into the country or not, to a more expensive market in nearby stores could be the throes of this situation.

A recession could mean a decline in the US economy for two consecutive quarters, and in this arrangement businessmen and investors will tighten their belts, the first effect of which will be the impact on Colombian exports.

The “equation” some make is simple: Annual inflation hits record levels in the US — 9.1% in June, the highest in 40 years — and then the Federal Reserve (FED) raises interest rates to reduce consumption and tackle inflation, but lower consumption implies that the economy shrinks and falls into a recession; In that economic downturn, that country’s industry will buy less from abroad.

Thus, Colombia was hit, because the United States is its main trading partner. It buys oil, fruit and manufactured products, among other things, and if that demand drops, the number of dollars it puts in will drop as well, which will put more pressure on the current account deficit.

Of course, all scenarios have a “but”. In the case of declining exports, the fact that if the dollar continues at the same levels as in recent days, even if fewer products are sold, exporters can count on the good prices of the currency to compensate.

Opinions are divided, and some believe that the market is already taking recession for granted which is why when it is confirmed by official statistics there will be no further movement. Others, such as Juan David Palin, director of analysis and strategy at Casa de Bolsa, see it as uncertain how long the dollar’s rally will last.

In any case, you don’t have to go far to see the havoc that an exorbitant dollar is causing in Colombia. In recent weeks, there has been concern about what might happen to the prices of beans, lentils and oil brought in from abroad, as well as differences in the cost of household appliances, services and tourism products, which are closely related to that currency.

While this continues to happen and in a scenario that everything gets worse when the recession hits, EAE Business School professor Josep Beltrán recommends decreasing the use of credit cards for dollar purchases abroad, and buying fruits and vegetables produced in Colombia – which will lead to them becoming more expensive, But not as much as the imported product – and if possible, save in dollars.

In addition to all this, during the slowdown in the Greek economy, and why not, in other world powers, the jobs that are hardest hit are those of immigrants. For this reason, the economic researcher at the University of Sergio Arboleda, Luis Fernando Ramirez, is of the opinion that the flow of remittances can be reduced.

Notably, remittances are the money Colombians send abroad to their relatives in the country, and last year they totaled 8,597 million US dollars, with the United States being the main source. It is clear that this capital city is an important driver of the economy, especially for the coffee region or the valley.

In addition, the entry of resources through the financial market will also be among the biggest casualties so that investors will be more modest and instead of putting money in emerging countries like Colombia, they will resort to dollars while they wait for the storm. to pass.

Stocks and bonds appear to have been hit the hardest this week, as the 10-year public debt securities (TES) closed Thursday at 13.47%, something analysts saw with concern as they didn’t deliver even in the most worrisome phase of the pandemic.

Will it affect GDP?

Ultimately, the combination of higher Fed rates, recession, the dollar and possibly lower exports and a fall in the financial market will affect the Colombian economy, although it is one of the most revitalizing factors.

Although GDP will grow by 6.5% this year, being one of the best in the world, by 2023 things will be different with the global slowdown and the above factors will raise it to 2%, according to BBVA calculations. Search.

A global slowdown will limit the growth of the sectors most closely related to exports (agribusiness), while moderating consumption and foreign trade will reduce the performance of trade and transport. Next year, it will be navigating an unfavorable international environment,” forecast experts from the company 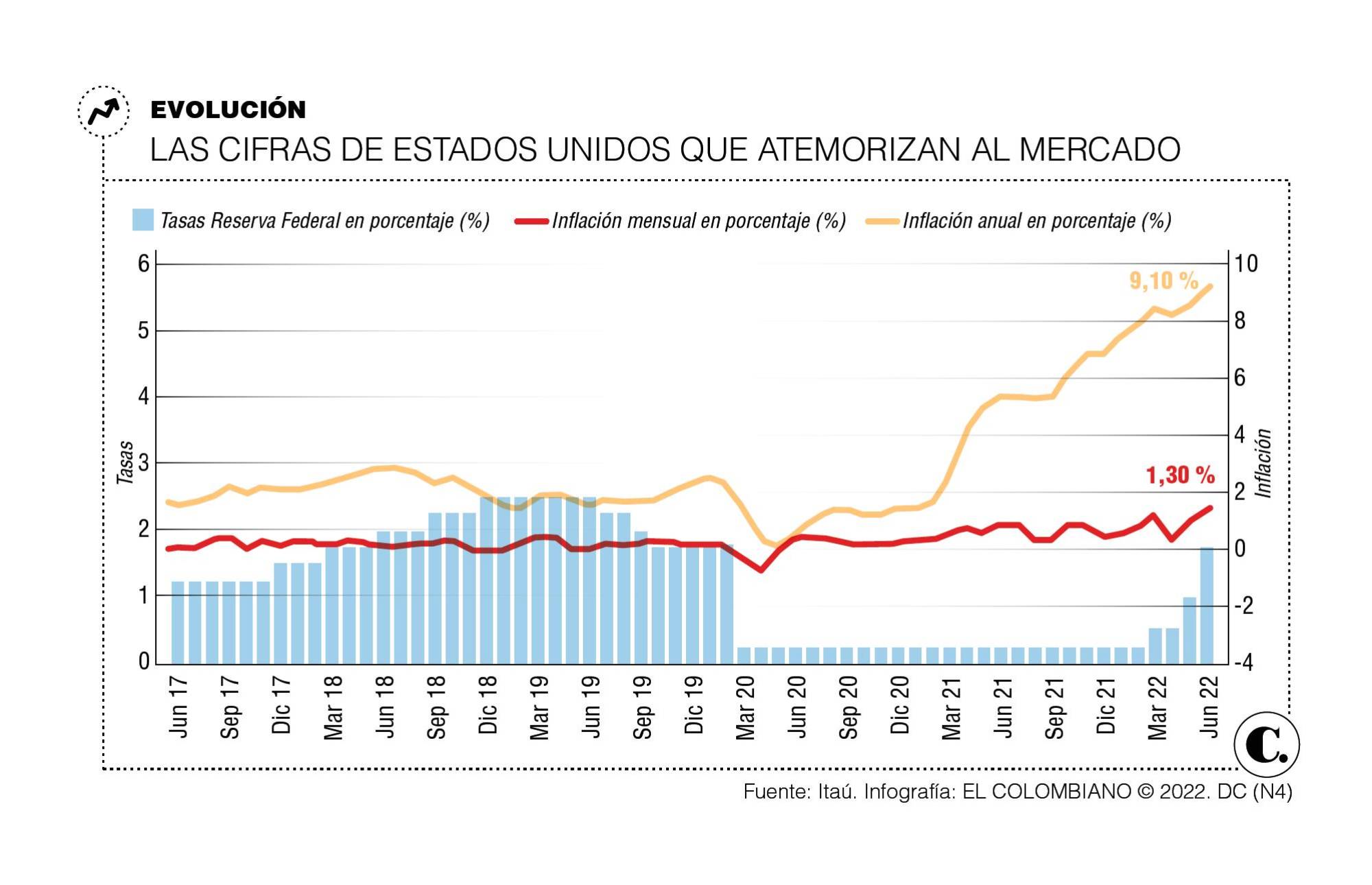