With the most expensive dollar in Colombian history, there are some sectors of the local economy that are better than others. Namely, that the state is doing calculations in a currency that yesterday reached $4,259 and for the second time in a row, so far in 2022, broke its record ceiling.

Javier Diaz Molina, President of the National Foreign Trade Association (Analdex), confirmed that people who receive salaries and dollar transfers are part of the beneficiary group; Because they get a better return by making the change.

Similarly, the union president noted that “exporters will get more pesos for every dollar exported,” but noted that the story is different for importers, given that they have to pay for goods in US currency and that each transaction will be much more. expensive.

It must be said that in Colombia, according to data shared by Analdex, only 0.65% of registered companies were able to export in 2021 (see chart), which allows us to conclude that there are quite a few companies that can benefit from such a high rate of change as current.

With this in mind, Maria Jose Bernal, director of Fenalco Antioquia, commented that the dollar above $4,200 negatively affects those who bring in 100% finished products and those who import raw materials with the goal of manufacturing in the country.

When asked how long it would take for increases in the price of goods imported by trade to be reflected, she replied that it depended a lot on each entrepreneur’s stocks. In his view, those who import non-perishable products have longer tenures with their inventory and can charge based on prices before the increase.

“Those who import perishable products like restaurants can see the dollar price reverse more quickly because ultimately the transmission mechanism is more immediate,” he added.

Jorge Enrique Bedoya, president of the Colombian Farmers Association (SAC), noted that agricultural producers who export would have better incomes if the dollar remained too high.

He explained that “the negative aspect of this increase in the exchange rate is the increase in the cost of imported inputs for the production of foodstuffs that are exported and those that remain in the local market.”

Carlos Ospina, a small farmer in the Pisa region, told EL COLOMBIANO that the cost of fertilizer has already increased by more than 50% since 2021, a situation that has led to a lower profit margin. This is added to the fact that you have to effectively transfer part of the increase to the end customer.

The effects of micro, small and medium enterprises

According to Corporación Interactuar, MSMEs have absorbed the impact of the exorbitant dollar since 2020. In line with this, Andrea Zuluaga, the business transformation leader of this entity, noted that these entrepreneurs have had to increase the prices of their products and this has affected their sales.

Among the difficulties they have been facing for months is the price of sea transportation, as the value of freight, according to importers, in 2019 amounted to about 2000 US dollars, while it can currently exceed 30 thousand US dollars.

Interactuar stated that this scenario puts MSMEs at risk as they need constant billing to survive. And if they had to raise prices for the end customer, they could be threatened with closure.

Outside of the business world, people are also directly or indirectly affected by the dollar. In this order of ideas, Edgar Pulido, director of Latam USA in Colombia, noted that those who bought this coin – before gathering You have tested – you will have an active shelter.

On the other hand, he emphasized that those who contracted debt in dollars will have to allocate more pesos when making their payments.

The expert recommended those who plan to travel abroad not to use a credit card as a method of payment in transactions that require dollars.

In the face of this, the head of Analdex added that trips abroad will also rise in prices. However, until the closing of this edition, the Colombian Association of Travel and Tourism Agencies (ANATO) had not responded to this newspaper about how the current exchange rate was affected.

In any case, Javier Diaz noted that “as in everything, there will always be winners and losers and we will see how the exchange rate stabilizes in the coming days.” 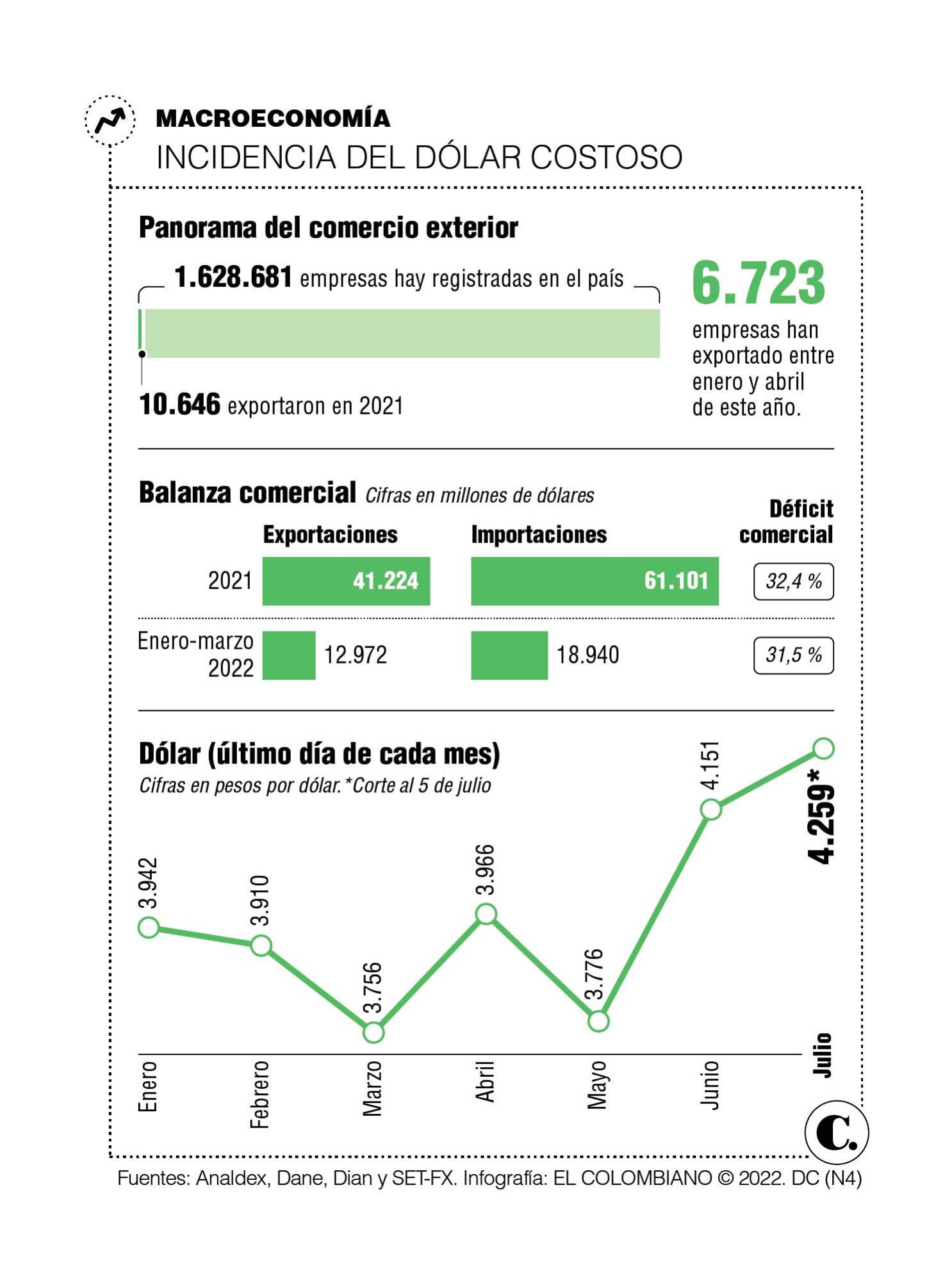