Pre-trial detention will be carried out at Ngayo-Men Prison.

“The court accepted in all its parts the request made by the Public Prosecution Office, and imposed 12 months of pretrial detention… We have faith that each of the elements will be satisfied, because this is a fact that has been verified more than the investigations will continue,” said the prosecutor, Myrna Ortiz. By the National District Prosecutor’s Office.

Prosecutors requested a year of pretrial detention, detailing in the coercive measure request document that Cruz committed the act by refusing a permit to export about 5,000 tons of used batteries.

According to prosecutors in the forced measure case, Cruz Motta went to the offices of the PRM leader with the intent to kill him, because he had not obtained approval for environmental permits to export second-hand materials. batteries.

In view of the fact, Aurum Gavia, SA is also under investigation, given that the defendant had original documents for which permits for used batteries were requested.

The case of the forced measure says: “Evidence shows that the accused was trying to obtain multiple passes, but he angrily complained that they did not solve anything for him.”

After the crime was committed, the accused took refuge in the Church of Jesus Christ, the High and Eternal Priest, where he was handed over to the authorities by Reverend Jose Arismande de Leon.

Defendant Miguel de Jesus Cruz de la Mota was transferred at 8:45 am from the preventive prison of the Palace of Justice, located on the fourth floor, to the courtroom located on the second floor. Once the procedure was completed, he was sent back to Preventive Prison, where he would remain until his transfer to prison.

Cruz de la Mota was arrested last Monday for the death of his childhood friend, which occurred on June 6 in environmental offices.

Orlando’s sister Jorge Mira and son, Delia Delcia Jorge Mira and Orlando Jorge Villegas, who did not speak when they left the court, but showed sad faces, were present at the hearing. 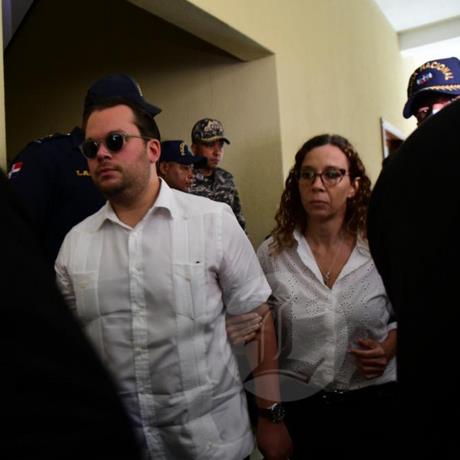 The defense attorney said that Jorge Mira’s family is most interested in explaining why he killed Cruz de la Mota; He also asserted that the defense of relatives sees only the truth, and that it was a dangerous and horrific event.

The defendant’s lawyer, Manuel Sierra, did not object to the one-year pretrial detention at the request of the Public Prosecution Office.

Lawyers for Fausto Miguel Cruz confirmed last Thursday that they would not oppose the coercive measure requested by the plaintiffs, although they maintained that their client was “not guilty.”

“The defense met and decided that no matter what budget (Fausto Miguel Cruz) had in order not to impose pretrial detention on him, the best thing would be, wisely, that we would not oppose the coercive measure initiated by (Fausto Miguel Cruz) the Public Prosecution Office,” Evo said. Renee Sanchez, member of the defense of the accused.

The hearing was scheduled to take place last Thursday, but the judge decided to set a new date for hearing a request for coercive action, as a result of the victim’s defense declaring that he needed more time to review the file.