As of 2:00 on Tuesday afternoon, relatives, relatives, political figures and personalities from various segments of society came to bid farewell to the Minister of Environment until yesterday, Orlando Jorge Mira.

Among the politicians who passed Blandino’s funeral home On Abraham Lincoln Avenue, there is former President Hipólito Mejia, who said on his way out that the deceased, unlike him, did not explode easily.

“He was a great success,” said the former President of the Republic at Blandino’s funeral home.

The other Minister of Defense was present Major General Carlos Luciano Diaz-MorvaHe described the event as a disgrace and tragedy for the country.

“It’s a pity, a misfortune for the country, and we only come to give the relatives the strength to be able to overcome this,” Díaz Morva said of his “great friend Orlando” as the late minister described it.

Diaz-Morva added that in this difficult situation, investigations must be awaited.

“When there is a very close personal relationship, as it was with them, the family, it is not that easy,” he said of whether he thought it right that he had allowed Jorge Mira’s executioner to pass the ministry with a firearm.

Although I do not like to venture into believing that the death of the Minister Orlando Jorge Mira It was premeditated, attorney Candido Simon stated upon arrival at the funeral home that videos prior to the event indicated that It was pre-planned.

“I have as a rule: I dare not believe that he did so with musing, stalking and betrayal, the fact is that (…) giving him 7 shots, in all vital areas, indicates that he had a very critical intent as well as the evidence scattered from the moments before he left his home The like is convinced that he will not return.”

Lawyer Simon considers it so Miguel CruzConfess to the minister’s killer Orlando George Mira must have had a stronger reason than to do so and more in the office of the deceased minister.

On the other hand, the Vice President of the Foundation for Institutions and Justice (Finjus), Servio Tulio Castaños Guzmán, went outside the place where the remains of the Minister of the Environment are located. Another pandemic has spread to society: ‘violence’.

“I think all sectors will have to come together to find a solution to all of this,” said Castaños Guzmán.

He stressed that he does not remember in his life that he felt more dread for a country as it is today with the death of the official.

“All the Dominicans who spoke about this have expressed their pain and the truth is that I believe this cannot be in vain. All this must be for something. And we hope that the political class will sit down and try to find a solution to a problem that is not only social,” he told the media.

In this sense, the Secretary-General of the Dominican Liberation Party, Charles Mariotti, said that the purple party is losing a “great mediator” with the opposition party.

Similarly, the former President of the Chamber of Deputies, Radamis Camacho, lamented The death of the Minister of the Environment. Classification of the event as a “disaster” and extremely distressing.

A politician is leaving, one of us is leaving. He’s not from my party, but he was political from the ground up. It is such an embarrassing fact that it hits hard the political class because of the shape.

Camacho stated that it is a fact that has no explanation and “The nation needs to be aware of the causes, Because Orlando Jorge Mera would have done so great to kill his trusted friend.

Earlier, the Prosecutor of the Republic, Myriam Germain Brito, who asked for respect for the duel, passed with great concern.

For his part, Guillermo Moreno, President of Alianza Pais, identified the deceased official as a “great man”. 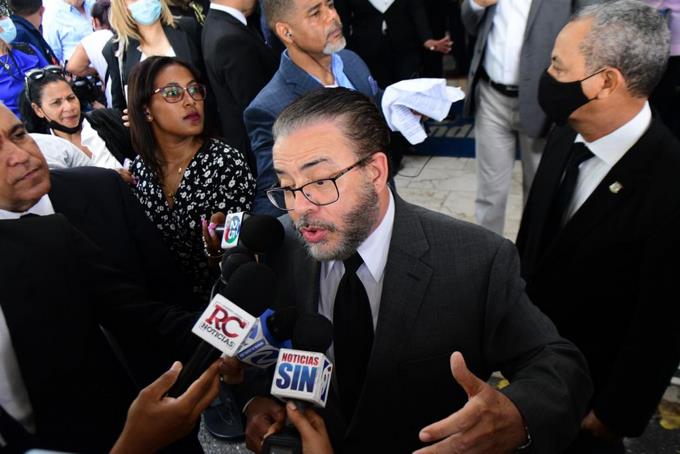 Jorge Mera’s remains are to be revealed from 2:00 p.m. this Tuesday at the funeral home in Blandino.

And the entrance to the funeral home includes dozens of relatives, acquaintances and journalists.

Earlier, a The body mass is located in the Basilica of San Rafael in the National Palace Which was attended by the President of the Republic, Louis Abenader. First Lady, Raquel Arbagi and Vice President Raquel Peña.